Updates : We receive letter from TNTJ as shown below :

Dear Best of Riyadh Admin!
peace be upon you!
thank you for publish our news on your site.
Alhamdhulillah, Blood donation drive for Haajis has been conducted successfully on Friday 21-10-2011. This is 5th such a campaign to help the Haajis. Approximately around 135 Litters of blood has been collected. Around 375 people participated; 308 donors managed to donate blood. (This is the second time, it crossed the mark of 100 Litters)
We are guided by Quranic teaching that says â€œâ€¦ And whoever saves a life, it is as though he had saved the life of all mankind! …â€ (Al-Quran 5:32)
We got a overwhelming response from our community members as well as from others, The voluntary donors of more than 375, included mothers from Tamil Nadu, Kerala, Hydrabad & U.PÂ Etc.. whose husbands are working in the kingdom. Pakistanis, Srilankans, and Bangladeshis also participated in this drive.
Â A standard health screening procedure was done prior to blood being donated. Each donor underwent tests for blood pressure, sugar and hemoglobin count before the donation. The checks also included communicable diseases.
TNTJ is comprised of a group of Tamil-speaking youths whose aim is to serve the people. In the past, blood donated in Riyadh was sent to Makkah and Madinah for Haj pilgrims. The group has also collected blood in July this year for Umrah Pilgrims.
TNTJ deployed vehicles at least of 20, for transporting the donors for donating blood to the hospital at Makka Road. TNTJ volunteers who own vehicles helped to bring blood bank and sent back to home the enthusiastic donors.
It will be interesting to add that the same day, TNTJ Jeddah province also conducted the blood donation drive at Jeddah King Fahad Hospital and 118 donors donated. Last week (14th Oct 2011) , TNTJ Dammam province donated 144 units of blood at Dammam Central Hospital, to be sent to Makka for Hajj pilgrims..

Herewith, I have attached Images of Riyadh campÂ event. 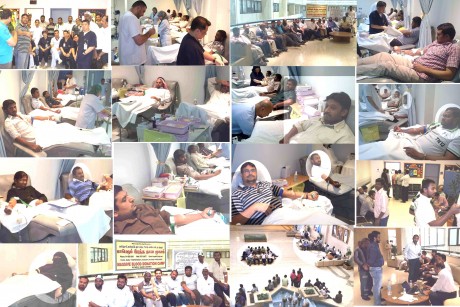 TNTJ- Riyadh,Tamil Nadu Thowheed Jamaat (TNTJ), a fraternity of southern Indians, will conduct the 13th blood camp on 21-October-2011 at King
Fahad Medical City for Hajj special, during this day we have arrange food and
transportation from Batha.

Check for some related news that the group has conducted :

Saudi Gazette : 120 units of blood donated for pilgrims ahead of Ramadan

Disclaimer : This is submitted thru our project Be Seen at Riyadh and posted for information.