Have you heard about the new phone that is now subject of discussion in tech world? I am referring to the new LG G2 phone. We have been given a chance to review the LG G2 phone to see their specifications and to feel the user’s experience. This new phone have been made to take into consideration the of people requirements. Users will be having a new experience with this phone because this is the only phone that have tried to experiment on the buttons. I am referring to the Back Button. LG G2phone have introduced a new location of on/off buttons and sound adjustments buttons. The point finger will definitely be useful for this phone. The back button could also be used in taking pictures and a lot more thing. 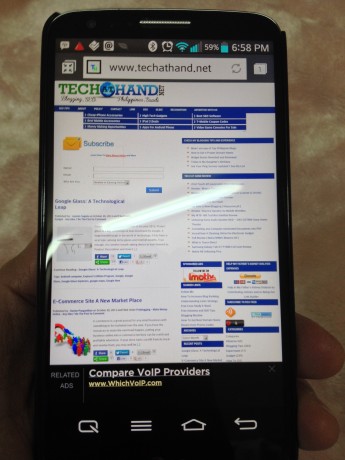 LG G2 has Qualcomm Snap Dragon 800, 2.26GHz. A really hardcore phone that could be used in multi-tasking without any lag. I could also say that this is one of the world’s fastest phone. LG find a way to make a solution for the sluggish user interface that an android user normally experience in the past. Due to it’s processor and memory this phone is definitely a good phone for gamers. In general the higher the processor capacity the better for gamers. But higher processor will only mean higher probability of having a battery drainage. And good that LG had think about it. We will discuss it in our battery section.

This phone have 13 megapixel camera with OIS system. OIS means, Optical Image stabilization. Photograph lovers will have a great time using this phone, it minimize the blur picture that can be caused by hand movement while taking pictures. Here are the camera specifications:

I could say that one of the biggest problem of new android phone or even ios phones is the battery life. Because the higher the phone specifications the higher the probability of draining the phone. So this phone has an advantage when it comes to battery life. Having a battery capacity of 3000mAh, Biggest in tier, which means longer battery life. It has also Longer DoU (1.18day). I have tested this phone without charging for 2 days. But of-course it depends to phone usage. But I can really see the difference compared to other android phones.

It has a good display having, 5.2”, Full HD IPS (1920×1080) and Power Efficient LCD (GRAM).  It is really good if you are gamer and loves to play games with really high color requirements. User could have a great sound experience while using its headphones. It has a bigger screen compared to other phones and it utilizes almost whole of its surface.

Here is the sample video taken in Dubai in the morning.

Here is the sample night video taken in Saudi Arabia.

Here is the sample picture taken by LG G2

LG G2 Is boasting of being World’s 1st Hi-Fi Smartphone. It is first to introduce Hi resolution 24bit/192kHz in comparison to other phones having only16bit/44.1kHz. The audio output is clean with an average sound level.

This new phone allows to set up the phone to be used by other individual in addition to the owner. As an example if your child wants to borrow your phone always, you can now make sure that he will not be able to delete any valuable information because you can give him his own phone interface. In guest mode you could be able to choose the specified application that you want to be access by your guest. Of course you doesn’t want to share personal information to the borrower such as, bank application, finance information, documents and others.

Here is the results of the Antutu Benchmarks

In general I am happy with this phone performance. I will discuss other features of the phone in our next post. We will also highlights different features and function of the phone that could not be found in other phone. I have decided to make 3 parts of this review. So soon you will see our post.

This is a re-post from Techathand.net