Have you heard the news about the new baggage rules of Saudia Airlines ? Well I just like to inform our readers regarding the baggage allowance to be implemented by Saudia Airlines. The news was posted in Arab News 2 days ago (here).

According to the report, the new rules will be implemented on September 1, 2012.Â  The new scheme is based on the â€œpiece conceptâ€ as opposed to the â€œweight conceptâ€.Â  Saudi says that the piece concept is automatically reflected on the tickets of the passengers.

Each bag shall have the following dimension : length 90cm, breadth 75cm and height 43cm.

Currently travellers are allowed to carry, 40 kg irrespective of the number of pieces. This will no longer be allowed on September 1, 2012. Only 1 piece is allowed with a maximum weight of 32 kgs.

Each economy class passenger will be allowed to carry only one piece of 32 kg or less. For the first and business class, the airline will allow two pieces of 32 kg each.

Each passenger who have two pieces of 16 kg box, will have to pay for the other baggage. The second will be calculated as an extra baggage. 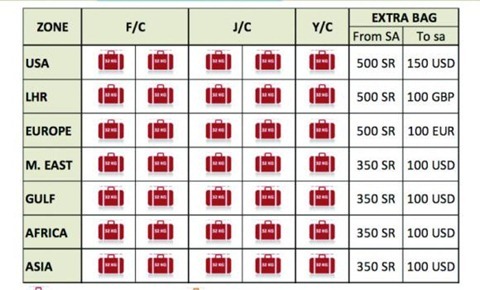 Extra baggage charge is shown on the picture above.

Holders of Fursan Gold and Silver Cards will be given an additional baggage allowance free of charge.

Carry-on baggage must not exceed 9 kg in First and Business class and 7kg in Economy class cabins. The baggage size should not exceed that of overhead compartment capacity. It is forbidden to carry compressed and liquid materials in either checked-in baggage or carry-on baggage.